Football in the twenty-first century means (among other things) becoming increasingly numb to astronomical offensive statistics. A quarterback surpassing 300 yards in a game? Commonplace. Teams having multiple 1,000-yard backs? Nice, but not nearly unheard of. A running back going for two-hundred plus? Buddy, our great state has seen a guy rush for well over a third of a mile.

Wide-open offensive systems, hurry-up approaches and teams playing up to 15 or 16 games in a season have warped our sense of numerical significance and seriously upped the ante for any athlete hoping to blow fans away with statistics. Even so, there are certain thresholds that still hold meaning. We could debate which milestones are still important or not, but most people would agree that rushing for 2,000 yards in a season is one of them. In 2019, only eight players statewide reached this mark, and only one (Northern’s Kyle Swartz) played fewer than 12 games.

If I told you a player once ran for 2,455 yards in a season, you’d likely be impressed; after all, only Ben Jackson of West Greene and Lenny Kelley of Dallas surpassed that total this past season. You may be more impressed to learn that this player did so in just 10 games, beating Swartz’s superlative 237.7 yards-per-game average from 2019.

But what if I told you this player did so in 1947, when everyone played both ways on grass fields and without facemasks? That he did so for a high school that no longer exists? That he played against opponents determined to knock him out of the game? And that he stood just 5-foot-4 and weighed 147 pounds? This is the story of Earle Mundell, a tiny back from Ambler High School with blazing speed that led him to additional fame on the track. A player who ran for more yards than anyone in Pennsylvania history up to that point, yet whose name has largely faded into history. 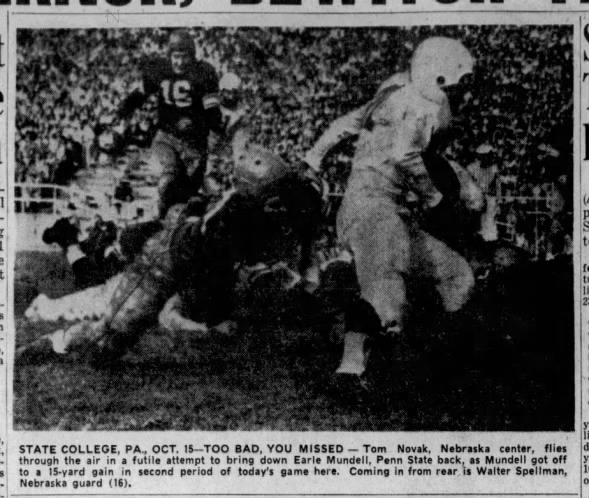 Mundell – whose name was often misspelled in print as “Earl” – would go on to be the smallest man on the 1950 Penn State football roster. He played for the Nittany Lions from 1949-1951 and was recognized as one of – if not the – fastest players on the team. As a high school senior, Mundell could run 50 yards in 5.5 seconds, roughly equivalent to a 4.4 forty yard dash.

Mundell’s legend was born in Ambler, which today is part of the Wissahickon School District. In 1955, eight years after he had last played high school football, the Delaware County Daily Times described him this way:

A scatback, Mundell was very deceptive and could stop on a dime while travelling (sic) at top speed. He was recalled as having tremendous speed and at times would reverse his field three and four times while on his way to a touchdown.

At the end of the season, Mundell became the first player in Bux-Mont Conference history to be named to the all-district team. During this era, Ambler won 33 games in a row, matching the number of touchdowns Mundell scored in 1947. He also earned a player-of-the-week award from the Maxwell Club, receiving high praise from then-Eagles owner Bert Bell at the ceremony. Following his final game, Mundell had scored 311 career points, which at the time was considered to be a national record. He also kicked and served as Ambler’s primary passer (remember, this is in the days of the single-wing).

Unfortunately, game-by-game recaps of Mundell’s terrific senior season have been difficult to come by online. Against Springfield (Montco), he had 31 carries for 243 yards and both touchdowns in a 12-0 win. Sadly, this is one of the few examples of game stories giving detailed statistics for Mundell’s exploits. Boxscores in the 1940s were basic at best and many newspapers only published statistics for scoring, not yardage totals. Many games were recapped with a simple blurb that gave only sparse descriptions of what had happened:

Mundell was a truly dominant force in suburban Philadelphia football. While he saw action at Penn State, he never shone as brilliantly as he did at Ambler. Some newspaper articles in the early 1950s asserted that Mundell’s lack of overwhelming success in college was due to his small stature. The fact that the game inflicted a punishing physical toll on him came up in more than one clipping that I found. While it is true that Mundell lacked ideal size to put up with the rough nature of football, one local journalist named Jim Hackett proposed that he took a beating because opponents were aiming to knock him out of the game. This tactic, while frowned upon by some, has always been a part of the game of football. The game in question, a 50-6 Ambler win over Jenkintown, had led some fans to claim that Ambler coach Johnny Meyer had run up the score. However, Hackett also alluded to another reason why Mundell had to withstand such rough play by his opponents:

“…For in the first quarter, Earl (sic) Mundell, the Black Knight of the Bux-Mont Conference was batted ruefully to the ground, immobilized… A crescendo of cheers shook the Jenkintown rooting section, they had ‘Got Mundell’…

“…as long as other teams insist on beating down a boy because he is great – or horrors, because he is Negro – Johnny Meyers will run up the markers for he has a right to do so…”

At another point in the season, Hackett described Springfield taking a similar approach when it came to roughing up Mundell:

“Another buddy reports that never in high school football has he seen a boy take the pounding Earl (sic) “Jinks” Mundell absorbed from Springfield on Saturday. Fists were flying into the lithe Trojan’s face on every play. His lips were swollen, his nose was gashed, his eyes were pinpoints when the game was over… But the kid showed [Springfield coach] Gockley his ability, his sheer guts, that all the rough tactics employed by a coach who has little respect for decency in sport – other than winning – could not stop him […] Futhermore, the hardened observer says he found himself leaping into the air as Mundell went on to score – not because Ambler won, but because this run was in direct repudiation of unsportsmanlike, rough football.”

Playing football as a black man in 1947 – the same year Jackie Robinson broke baseball’s color barrier – was exceptionally difficult. Even if you were given the opportunity to see the field, you were almost certain to face extremely physical play from your opponents that could easily cross the line into physical attacks. And while Mundell had the chance to attend a major university to play football, most college teams in the 1940s had very few black players on their rosters. Of course, for every school south of the Mason-Dixon Line during this era, the number of black players on college football teams was exactly zero. Northern teams often weren’t much more diverse. During his senior year of high school, Mundell was given a scholarship to Penn and, had he attended, would have been the first black athlete in the school’s history. And nearly every news article written about his athletic achievements referenced his race, sometimes going so far as to call him “The Black Knight.” All of this is not to assume that players from Jenkintown and Springfield were aggressive with Mundell solely because of his race, but it does serve as a chance to think about how discrimination played a role in the game as a whole during the time before the Civil Rights Era.

Mundell went on to graduate from Penn State and then earn a graduate degree from Xavier. He spent his career in education at schools in Ohio, serving as a teacher, a principal and a superintendent. He died in 2017 at the age of 87.

Legends are born by extraordinary performances in difficult circumstances, but they remain legends because of the haze and lack of clarity surrounding them. If we knew every single detail about Mundell’s season or had film of it, it would lose some of this luster. Today, we can watch games live from anywhere and endlessly review highlights; the impact technology has had on football is undeniable and overwhelmingly positive. Even so, there’s something alluring about the unknown, especially when our present world feels as if nothing is left undocumented. Reading seventy-year-old game recaps allows us to imagine how awesome Earle Mundell must have been, twisting and weaving his way around and through bewildered (and sometimes hostile) defenses. As nice as film is, I think I prefer it that way.

11 thoughts on “The Legend of Earle Mundell”