I took Meteorology 003 at Penn State as an undergrad for a science credit, so I’m essentially an expert on all things weather. Just don’t ask me to prove that. Now, I spent quite a few Thursdays at the Darkhorse (RIP), so those Friday morning lectures don’t stick in my memory as well as they should. But I’m almost certain that they didn’t say anything about shadows or small rodents, so I’m a bit skeptical of the whole Groundhog Day thing. But it’s also a great piece of Pennsylvania culture and it’s fun to revel in all of its weirdness, so let’s get started.

A College Football Hall of Famer, Jordan was a player, coach, athletic director and conference commissioner. I’ve included him without knowing for certain whether he played high school football; his brief biography in the Punxsutawney Sports Hall of Fame only mentions a high school basketball career. He won 100 of his 175 games as a head coach at both Amherst and Harvard before becoming the commissioner of the Southern Conference from 1960-1973. 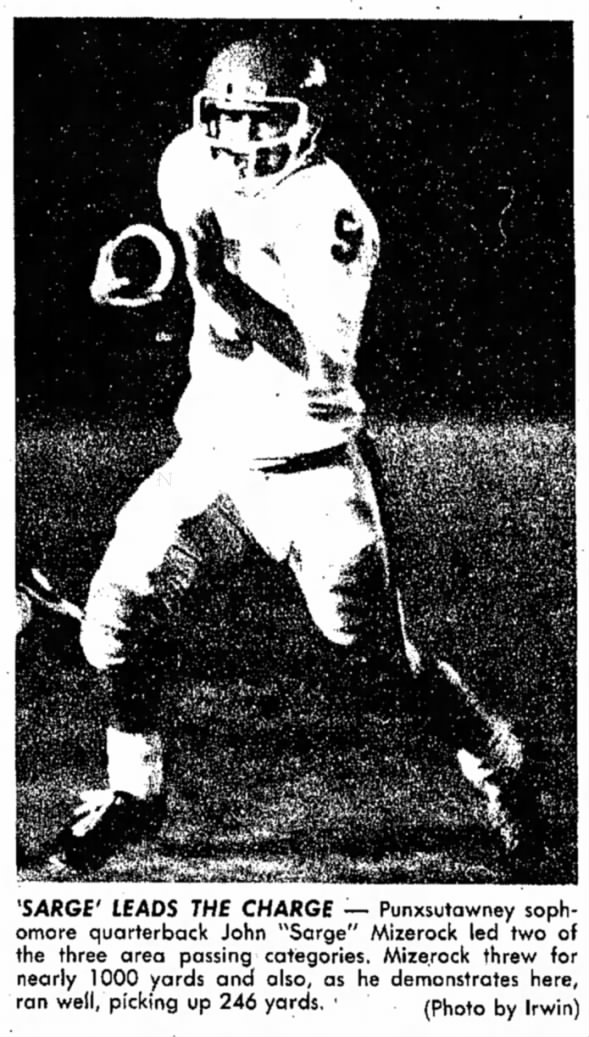 Tue, Nov 16, 1976 – Page 18 · The Indiana Gazette (Indiana, Pennsylvania) · Newspapers.com
Mizerock, commonly called “Sarge” while an athlete at Punxsutawney, made his name as a Major League Baseball player and long-time coach. He also served as the manager of the Kansas City Royals in 2002. But Mizerock was also an outstanding football and basketball player for the Chucks. In 1978, he was named a second-team all-state defensive back by the Associated Press and finished his career as a quarterback with more than 2,500 passing yards and 1,000 rushing yards.

Wed, Dec 3, 2003 – Page 54 · Indiana Gazette (Indiana, Pennsylvania) · Newspapers.com
Picked 15th overall by the Cincinnati Reds in the 2007 Major League draft, Mesoraco (like Mizerock) achieved his greatest success as a catcher. Named to the 2014 National League All-Star Team, Mesoraco saw his career hampered by injuries by the time he turned 30. At Punxsutawney, Mesoraco ran for 345 yards as a freshman in 2003 while also starting at safety and handling punting duties. After playing football again as a sophomore, he gave up the sport to concentrate on baseball.